Frédéric Petitjean wrote his first plays at the age of twenty. After participating in several festivals in Avignon, he moved to the United States, where, for ten years, he wrote feature films and cartoons in the country’s major studios. Back in France since 2006, he now works mainly for the cinema.

Eight 35 holds the rights to a transmedia audiovisual project (Books/Series or Films) entitled the DOLCE, the last family of magicians in the world who will try to save the planet.

A great fantasy adventure novel that takes the form of a political and financial thriller. A transgenerational comedy full of humor thanks to the amazing powers of a family of magicians who go to great lengths to appear ordinary. An initiatory trilogy about knowledge, memory and filiation. No magic wands, no dragons or flying broomsticks. They use their brains at 100%.

This novel in 3 volumes was written by Frédéric Petitjean

“Since Harry Potter we had rarely been so bewitched” With a lot of humor and dazzling finds, Frédéric Petitjean signs a novel of an intelligence and a jubilant finesse.
Marie Rogatien

“Harry Potter, the student
With an expressive writing and a modern tone, he creates an original atmosphere and spares a suspense in small onions. We can’t wait for the next two episodes of this trilogy.”
Delphine Peras

“An effective mix of genres with the Dolces, a promising series launched by the scriptwriter Frédéric Petitjean… He spices up his story -the adventures of the last family of magicians in the world, who have taken refuge in Brooklyn- with a political-financial plot against the backdrop of the global crisis: a subject that speaks to everyone, and is definitely topical. Pamela Pianezza”
Be
The beginning of a saga that promises to be epic ***
TV magazine

This first opus is really captivating […] Through this trilogy, Frédéric Petitjean denounces man’s quest for ever more modernity, to the detriment of the increasingly polluted planet.
Cécile Chevallier – Le Parisien November 2011

We feel like in a movie in this explosive novel. The characters, although fantastic, are convincing: they have flesh and a studied psychology – none of their gestures or their dialogue happens by chance. The action scenes unfold before our eyes like shooting images and the story never ceases to surprise. Frédéric Petitjean, who works for the cinema, has used all his knowledge of the seventh art to write his perfectly successful trilogy.
Laure Buisson – Carrefour Savoirs

The Dolce, a scenario becomes a bestseller
The French Film December 2011

A flamboyant first novel, […] a thrilling economic fable that has captured the attention of adults and young readers alike since its release. […] The story of the Dolces is breathtaking. Frédéric Petitjean’s writing has a lot to do with it, as he is “attracted by the music of words”. Karine Frelin – L’Alsace

His first novel, “Les Dolce”, which, according to the numerous sales and rave reviews, is presented as the next literary success to devour. Pauline Chastanet – Le Républicain de l’Essonne

A whole imaginary world (very much linked by the symbolism to the catastrophe that is taking shape in the current world, one could easily speak of an anticipation story) developed by Frédéric Petitjean […] who launches here into a long saga.
Luc Monge – La Savoie

“La route des magiciens”, the first volume of a trilogy of urban fantasy called “Les Dolce”, is striking in its originality.
Est Magazine 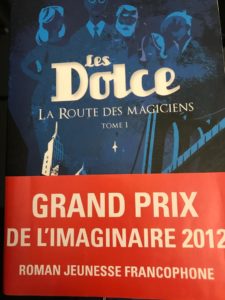 On the occasion of the publication of the third part -The Last Well, in June 2016 at Pocket jeunesse Editions , the first two parts have been reissued with a new cover more suitable for the target readers young teens , teens and young adults .